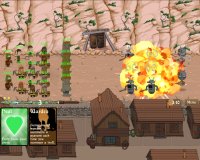 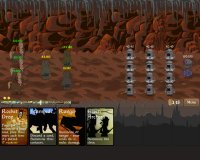 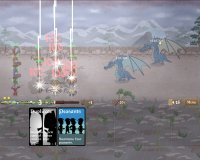 Trouble With Robots released on Android

The mobile version of Trouble With Robots is available for Android on Google Play. In addition the iPhone / iPad version has been updated with bug fixes and new options.

Trouble With Robots is out now on iOS!

Our friends at Art Castle have been busy creating an iOS version of The Trouble With Robots, due to be launched on the App Store on Thursday the 27th of November 2014. If you'd like to know more, head over to the official site and sign up for updates, or follow the developer on Facebook / Twitter!

I'm told there's also an Android version in the works!

Just for fun, Digital Chestnut has released a free web-based game along the lines of Cookie Clicker and Candy Box.

More levels, more cards and more robots await you in The Trouble With Robots Megamort expansion!

If you've purchased the game previously please click here to download the free Megamort expansion patch. New customers will find the expansion is already included in their copy of the game.

The Megamort expansion will be out on Wednesday the 28th of November 2012, free to new and existing customers! In addition to 10 new levels it will include 8 exciting new cards like these:

Digital Chestnut is working on a free expansion to The Trouble With Robots, codename Megamort. The expansion will feature 8 new story levels, 2 new challenge levels and a yet to be determined number of new cards.

To celebrate excellent reviews of The Trouble With Robots, we've reduced the price and slightly streamlined our order process. Now there's no excuse to miss out on the fun!

More Screenshots
I've added a few new screenshots to the Gallery.
Release Date Announced
The Trouble With Robots will be released for PC on Thursday 23rd of August 2012, priced at $18.99 / €16.50 / £12.99. Both the full game and a free demo will be available to download from this site.

Video
Digital Chestnut is pleased to announce a trailer video for The Trouble With Robots, our upcoming customisable card game for PC. Check it out on the game page.
Gallery
As part of a much needed overhaul of this site, there is now a Gallery featuring 9 new screenshots alongside the existing images and card previews.

Twitter!
I'm experimenting with twitter, you can follow my account @GeoffW0.
The City
Since the game's almost finished it's about time I shared some more screenshots. Here's one of the city area, and there are a few more on the facebook page. 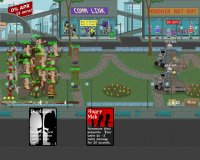 Duplicate Preview Added
Duplicate is a combo-tastic card that lets you get the most out of your other favourites.
Mining Guild Preview Added
Another card preview, Mining Guild summons three dwarves and is great with any discard effect.
Boulder Crash Preview Added
Another card preview is up, this time of a direct damage spell. 'Boulder Crash' makes an excellent centre piece for any dwarf deck.
Card Previews
Previews are up of a few of the cards in The Trouble With Robots. The game's in very good shape and I'm looking forward to showing you more in the coming weeks!
We're on Facebook!
There are now Facebook pages for Digital Chestnut and The Trouble With Robots. Like us to show your support!

The game will be available for Windows PCs early in 2012.
Game in Development
I prototyped some game ideas earlier this year, and one of them really stood out. Digital Chestnut is developing this idea...
About Digital Chestnut
Digital Chestnut is an independent computer game developer, run by Geoffrey White.
News Game Demo Buy Gallery FAQ